Our current issue of British Bride magazine has been a phenomenal success.  Selling out of glossy print copies within the first 4 weeks of sale and circulation figures being more than 40,000 globally.

We knew our New Year issue of British Bride magazine was going to be a special one.  We all felt it while we were excitedly shooting our exquisite front cover and main editorial at the very beautiful Old Royal Naval College in Greenwich, London.  The architecture there was amazing but The Painted Hall (by Christopher Wren) as seen on our front cover really was something else. 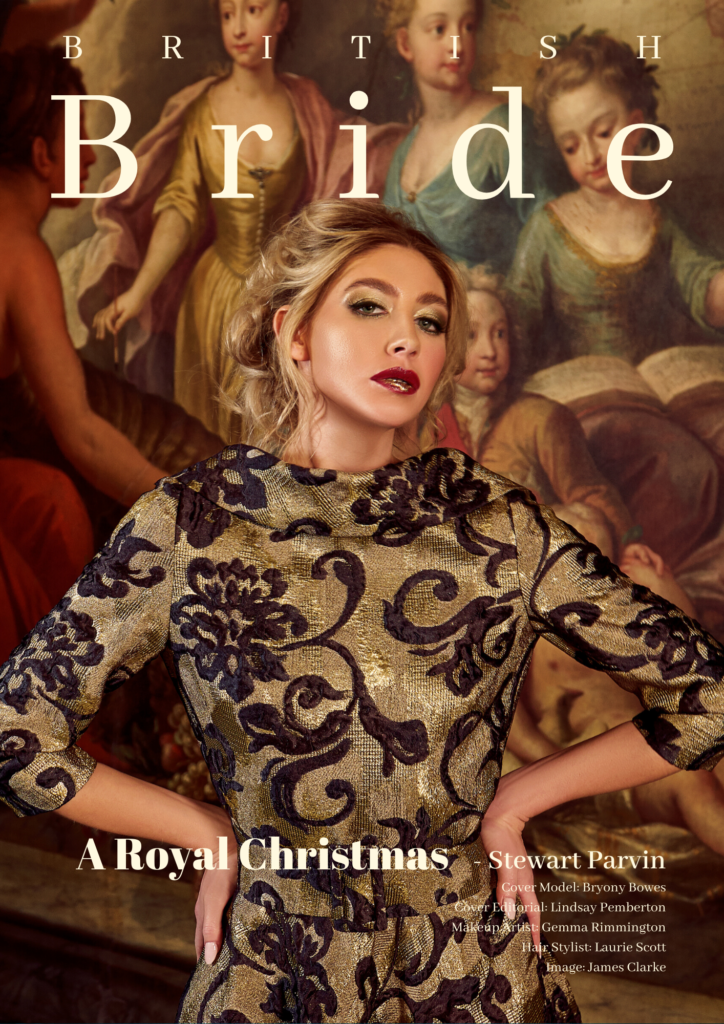 For the cover shot, the brief was to create a glossy beauty look.  Gold eyes were a definite requirement for the Christmas cover look and a beautiful deep red lip.  I wanted this look to ooze “luxury” as the perfect accompaniment to the stunning Stewart Parvin gown.  The hair styling was soft and romantic,  beautifully styled by Laurie Scott.

Cover model Bryony had amazing skin so with a little preparation, I was able to create a beautiful glass skin effect for her base.  Her brows were naturally full so I just groomed them with Soapbrows and filled in any tiny gaps.  The red lip with the gold eyeshadow was a really strong festive beauty look.  Not one to shy away from my creative itch, we added a little extra sass. Actually, it was EXTRA AF!

The gold lip drip.  The lip drip has become a favourite look of mine and while it might have seemed like a crazy idea to mix creative up with a bridal cover, we aren’t a traditional bridal magazine!  We are a luxury fashion-led glossy magazine.  Luckily the rest of the team were on board with the idea of stepping away from the traditional beauty look and adding something extra. 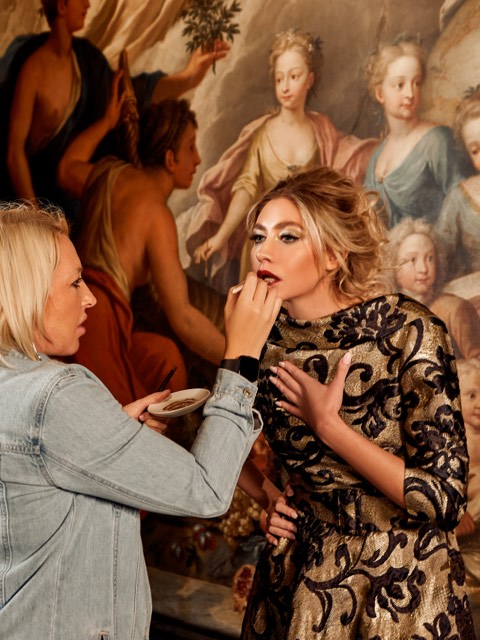 The one chance Lip Drip shot

Preparation for the lip drip was definitely a full team effort.  When I wasvcreating this look, it required a steady hand.  The model’s face needed to be at the perfect angle.  There was only a very short window of opportunity to create the lip drip.

I was working with James Clarke who was taking the images for the magazine on this photoshoot.  He also doubles up as our ridiculously talented Editor-in-Chief and designer of couture garments.  I knew I could trust him to get the perfect image.  He told me that he had “the shot” but it wasn’t until a couple of weeks later I saw the image in it’s full glory.  I did the happiest of happy dances!  I was over the moon with the final image.  It captured everything I wanted from the shot.  The angle, the drip “dripping” and real skin even showing pores.  It looked fabulously glossy! 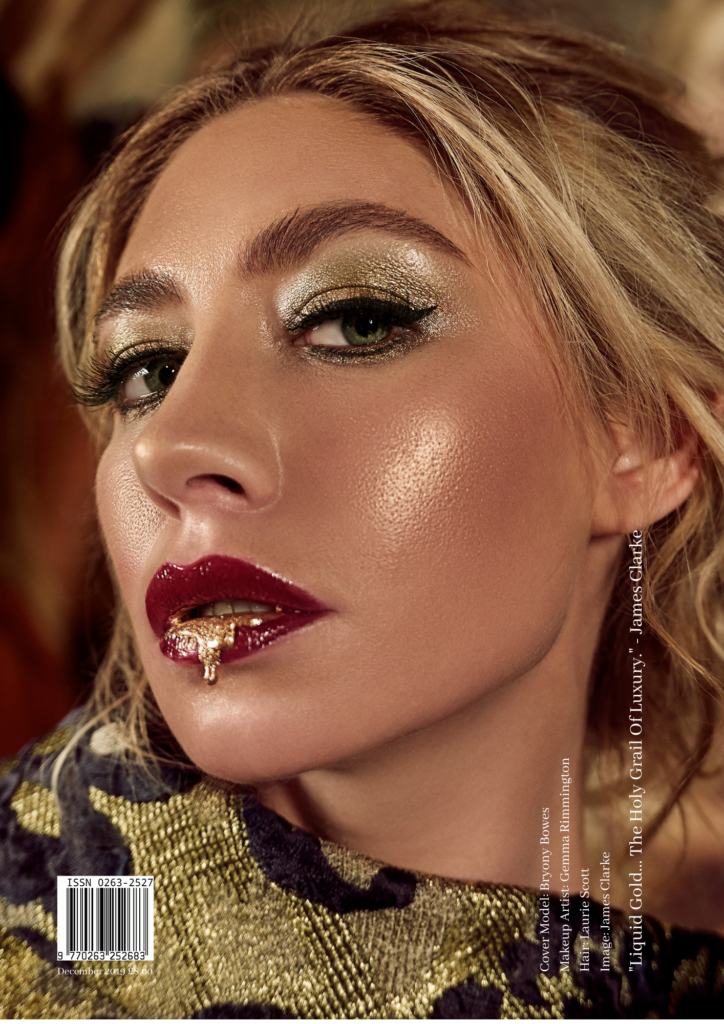 The image became the back cover to the magazine.  British Bride boasts 2 cover images, both as highly coveted as each other.  It seemed like a bold move to use a creative beauty image for one of our covers.  It just worked and represented everything the British Bride team pride themselves on.  Luxury, beauty, style and being different.

The magazine is filled with such beautiful imagery.  We are so proud of the magazine.  Particularly this issue.

We have some very exciting followers and people viewing our stories on social media right now. We have some really exciting plans for 2020,  It is such an exciting time!

Here are some more images from our main editorial…

Credit to the full team of people who contributed to this editorial;

Although all print copies have now been sold you are still able to grab a coffee, put your feet up and download our magazine.

We are always scouting for new submissions.  From real life weddings to featuring luxury wedding suppliers  and editorial submissions.  So if you would like to be considered please contact us on;

If you are looking to book me for your bridal makeup at your wedding you can contact me here. 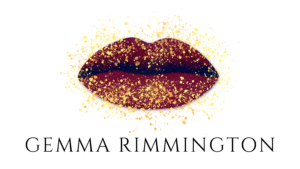 It seems that there are delays with Royal Mail 1st class postage. I have recently posted vouchers out and they seem to be taking 1-2 weeks to arrive.

If you plan to buy gift vouchers for loved ones and would like me to post them to you, please allow enough time for likely delays…

Since I started my business back in 2015, my business name became my professional identity. However, there have been big changes over the last year in every single aspect of my life and as we're approaching the end of the year, it seemed like the right time to reflect the changes to start a fresh new year. Some of you may have already noticed the change on my socials.

So let me reintroduce myself 😉🙌

I am now Gemma Clark. The "generally" minimal makeup wearing Makeup Artist and an unapologetic beauty junkie. I specialise in bridal makeup and editorial makeup for fashion. I am currently the very proud owner of 9 industry awards - just waiting on number 10 and then I'll celebrate by running off to the sunset in Beverley Hills. My work and articles have been published in various magazines including Vogue Italia. I am a huge advocate of real beauty for real women. Nothing gives me more pleasure in my job than making people feel amazing and confident. We never know what is going on in peoples lives - lack of time, struggles, hard times… and being able to boost a client’s confidence is the best feeling.

I am freelance but I am also represented by @ttmmanagement for work.

How would I sum up up my work? 🤔
More red carpet, less insta-glam 💄💄

Although I’ve tried to do a seamless transition, there might be some glitches along the way with links under my old name but bear with me and be kind because this is a big step 😉

Thanks to @jamesclarkelondon for designing and tweaking my old/and new logo and to Chris who has been a massive help with the techy transition behind the scenes. ... See MoreSee Less

Looks great Gemma! Your looking fab too! Proud of you as ever! X

Amazing, keep catching those dreams. You deserve it xx

Well done you! Looking absolutely stunning too, as per usual! ♥️

“What's in a name? That which we call a rose by any other name would smell as sweet.” Go get em tiger! You’ll always be Clark to me anyway 😘

Wishing you continued success. To the one and only original GC. Xx

Want to learn how to apply your makeup like a pro - and to make it last all day?

My private makeup 1:1 lessons are very popular and gift vouchers are also available to gift this as a fabulous Christmas present 💄

Get in touch to book yours or purchase your vouchers 😘

Another late summer bride from this year. Emma looked super pretty with this soft makeup look focussing on beautiful skin and a natural glam finish ♥️🥰

I've looked at the when it popped up and thought.. God she's the double of Emma lol.. Beautiful xx